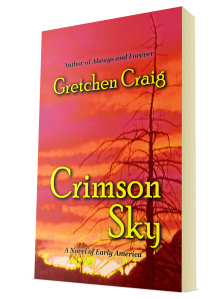 Zia’s world has been shattered by her husband’s loss, by murderous marauders, and by drought. To save her child from starvation, she accepts the protection of a Spanish conquistador, but is the love and security he provides worth abandoning the sacred gods and even her identity as a woman of the pueblo?

Diego Ortiz yearns for a home and a family in this strange new land. When he meets a beautiful woman of the pueblos, he offers her not only protection for her child and herself, but also his everlasting love.

Ashka, left for dead after an ambush in the forest, challenges death itself to achieve his two heart’s desires, returning to Zia, and exacting revenge against his greatest enemy, the Spaniard Diego Ortiz.

With meticulous attention to historical detail, Crimson Sky brings to life the clash of two great civilizations. In 1598 when the Spanish come into the land, the Puebloans fight for their faith and their culture, and in the end, for their lives.

Now available in paperback and e-book on Amazon.