You might think that a moderately sized city in the heartland would be an unlikely site for one of the best writing conferences out there.  But ‘tis.

Last weekend, writers of all genres convened at the Embassy Suites Hotel to hobnob, to pitch to agents and editors, to sit in on presentations and meet favorite authors.  Lots going on, and good food, too.

The keynote speaker was Steve Berry.  He’s a publishing phenomenon, gazillions of his books in print, translated into maybe 35 languages.  He spoke once and taught once.  Very interesting, very helpful, and seems to be truly nice.  No display of the regrettably common hubris one sometimes sees in celebs.  Maybe because he worked long and hard to get where he is in publishing.  Also, his wife would be a down-to-earth anchor for any man.  Steve’s books are plot driven thrillers like Tom Clancey’s.  Or Dan Brown’s.  There’s a puzzle to solve and intrepid, interesting characters trying to solve it.  I’d say Berry is the best writer of the three, so if you like long, involved books, try Steve!

I hung out with Wendy Watson who writes cozy mysteries. She lives here in my town and teaches political science at the university.  We talked about Fox news, Sarah Palin, the Texas legislature (it’s full of crazies!), Donald Trump, and our scintillating writing. 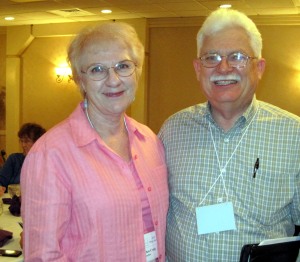 Also spent a lot of time with my friend Dan Case, president of the Oklahoma Writers’ Federation, Inc. this year.  He runs a small press, AWOC.COM Publishing. If you’re looking for a publisher you can trust, call Dan!

Among the big names were Scott Eagen of Greyhaus Literary Agency.  He represents romance and women’s fiction.  I had lunch a couple of times with Kathleen Anderson, another literary agent whom I hope to query and wow. 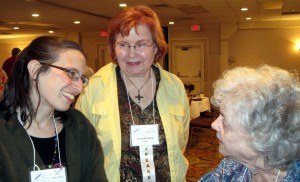 Other folks there you might know:  Chuck Sasser, intrepid traveler who writes really fine men’s novels, though I in all my feminine glory read and remember clearly his compelling novel about a sniper,  The 100th Kill.  Also, he looks fetching in a feather boa. Peggy Fielding, queen of the romance story.  Jackie King of the Chick Lit for Foxy Hens series. Velda Brothertonwho writes historicals.  You should have been there.  We could have had cake and coffee together.

Gretchen Craig’s lush, sweeping tales deliver edgy, compelling characters who test the boundaries of integrity, strength, and love. Told with sensitivity, the novels realistically portray the raw suffering of people in times of great upheaval. Gretchen was born and raised in Florida. She’s lived in climates and terrain as diverse as the white beaches of the Gulf Coast, the rocky shores of Maine, and the dusty plains of Texas. Her awareness of place imbues every page with the smell of the bayous of Louisiana, the taste of gumbo in New Orleans, or the grit of a desert storm. Rich in compelling characters and historical detail, Always and Forever is a sweeping saga of Josie and Cleo, mistress and slave. Amid Cajuns and Creoles, the bonds between these two remarkable women are tested by prejudice, tragedy, and passion for one extraordinary man. Gretchen’s first novel won the Colorado Romance Writers Award of Excellence for Mainstream with Romantic Elements and was chosen as an Editor’s Pick in the Historical Novel Society reviews. Ever My Love, winner of the Booksellers Best Award from the Greater Detroit Romance Writers of America, continues the story of Cleo and Josie’s families, of their struggle for principle, justice, and love in a world where the underpinnings of the plantation culture are crumbling. Crimson Sky, inspired by the pueblos, mountains, and deserts of New Mexico, evokes the lives of people facing neighboring marauders and drought. Now the march of Spanish Conquistadors up the Rio Grande threatens their homeland, their culture, and their entire belief system.
View all posts by glcraig →
This entry was posted in Uncategorized and tagged conference, Dan Case, Oklahoma, Steve Berry. Bookmark the permalink.